Now we have a script we need to attach it to a GameObject to work. I briefly covered GameObjects in Basics of Unity and C# – Introduction to Unity, however in this part I will go into much more detail about them.

The only component all GameObjects have in common is the Transform component. This component controls where the Object is in the scene, its rotation and how large or small it is (scale).

Open Unity. Right click in an empty space in the hierarchy window. From this menu select Create Empty. 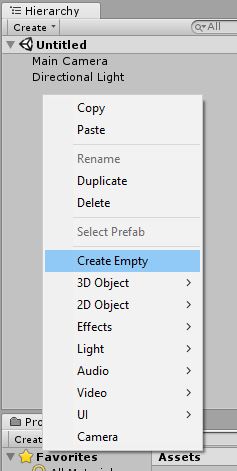 A new GameObject should appear in the Hierarchy called GameObject. We can easily change its name by clicking on the object and selecting it’s name in the inspector. Change the name to Player and Press enter to save the change.

Also check its location in the scene. If it is not at (0, 0, 0) change it now by either entering 0 in each axis box or selecting the gear in the upper right corner of the transform component and selecting reset.

Now we can attach our script to it by first clicking on our new object and then dragging the script from our Project window to the Inspector OR by clicking the add component button and searching for MyScript before selecting it from the list.

We have now attached our script to the object.

In the next part we will look at public and private variables.

One thought on “Asteroids – Creating a GameObject in Unity”